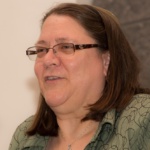 Rabbi Tracee Rosen has lived in the Valley of the Sun for the past 7 years. She is the rabbi of Beth Emeth Congregation in Sun City West. Previously she was the spiritual leader of Temple Gan Elohim in the West Valley, and the Director of the Florence Melton School of Adult Jewish Studies for the Board of Rabbis of Greater Phoenix. Prior to coming to Phoenix, she was the senior rabbi at Congregation Kol Ami in Salt Lake City, Utah, and one of the rabbis at Valley Beth Shalom in Encino, California. She is a graduate of the Ziegler School of Rabbinic Studies at the American Jewish University in Los Angeles, where she received numerous awards for academic excellence. She also earned an MBA at Washington University in St. Louis, and prior to becoming a rabbi, she was an assistant vice-president at one of the largest banking firms in the country. Rabbi Tracee and her wife, Keren Goldberg, have one daughter.