Holocaust Torah Scroll #325, which proudly stands in a case in the foyer of Beth Emeth Congregation, is one of 1564 Czech Memorial Torahs on loan from and distributed by the Memorial Scrolls Trust of the Westminster Synagogue in London, England.  This Torah comes from Uhrineves, a village in Pitkovice, which is a suburb of Prague. 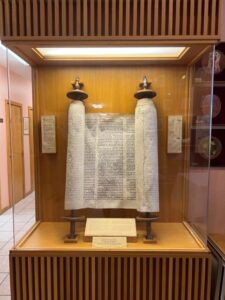 This Torah stands as a sacred memorial to the Jewish souls of Uhrineves whose lives were cut short during the Holocaust. It was written in the 1800s. Correspondence indicates that Torah #325 was acquired for Beth Emeth through a generous donation from Arthur Leist, the congregational president in 1986. It was Mr. Leist who claimed the Torah at the Phoenix airport when it arrived in 1987.  After our current building was completed, the Torah was formally dedicated in a ceremony on April 15th, 1988.

The Torah is open for display on the  section containing the verse “Thou shall love your neighbor as yourself.” (Lev 19:18)

On the wall near the Torah’s case is a tribute to the individuals who were transported from Uhrineves to Terezin in 1942. The tribute lists each individual’s name, birth date, final destination and age at death. We remember them! May their souls be bound up with the righteous and may we never forget!